A Message from Rabbi Jordan

As the targeted bombardment begins and troops start to cross the international border, I have chosen to undertake two actions.

The first is to pray for peace, adding my voice to the hundreds of thousands of others, wishing that it was not a foregone conclusion when ego and nationalism are involved that blood will pour from human bodies into the earth.

One of my acquaintances  in Kyiv asks that we join together in prayer: 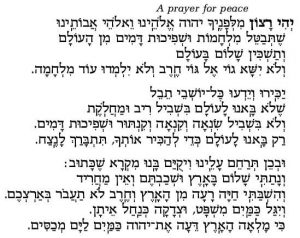 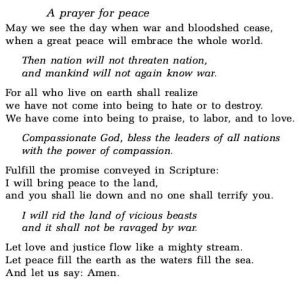 The second action I take is guided by Rabbi Igor Zinkow.  I first met Rabbi Zinkow when he was a teenager in Chelyabinsk, and I was a rabbinical student helping lead Passover Seders in the Former Soviet Union.  At that time I had no idea - there than his talented guitar playing and warm personality - that he would soon join me on the board of the World Union of Progressive Judaism and stand on the bimah of the Liberal Jewish Synagogue in St. John’s Wood as one of its rabbis.

Rabbi Zinkow intensifies and focuses my attention beyond prayer.  Today he shared the words of Student Rabbi Lev Taylor’s grandfather, and included his own message:

'It is not enough to pray for peace. We have to work for it… to denounce injustice, not only when it is committed against us but also when it is committed against others; to defend human rights, not only our own but also theirs; to insist that peace requires sacrifice — of pride, or wealth, or territory; to practise and promote the way of moderation, compromise and reconciliation; and to build bridges of respect and understanding, trust and friendship, across the chasms that divide humanity.’ I would like to add. If war already started, it is not enough to pray for its end. We need to save as many lives as we can.
Please help and donate to support the Jewish community in Ukraine. https://wupj.org/give/ukraine/

To donate directly from the UK please use this link https://www.ljs.org/form/donate. Please add in the notes section that the donation is for UKRAINE.

Rabbi Zinkow is heading an international effort to make sure that the buildings our Reform communities in Ukraine meet in are safe, their Sifrei Torah (Torah Scrolls) are looked after,  and that their most vulnerable are able to be moved further west, or even out of the country.  Today I learned that the Reform Jewish communities in some neighbouring countries are preparing to receive refugees, aided by the monies Igor is raising.

Today, I pray for peace and safety, and I also am doing what I can to make sure our communities in Ukraine have the resources they need to make decisions.