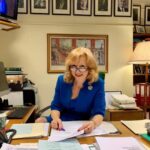 Dame Eleanor Laing has been the Conservative Member of Parliament for Epping Forest since May 1997, having had a career as a solicitor. She played a prominent role in opposition with Shadow responsibilities (at different times) for Justice, Women and Equality, Scotland, Children and Education. She was appointed Deputy Speaker in 2013 and Chairman of Ways and Means in January 2020, the first woman to be elected to this role.

The Social and Community Group are delighted that she has agreed to join us in conversation, following the footsteps of her parliamentary colleague, Wes Streeting MP, the Labour MP for Ilford North, who addressed us in October 2019.

Robert Young will be pleased to receive questions in advance, which you would like to pose and they will be given priority for the event.

The Zoom details are as follows: