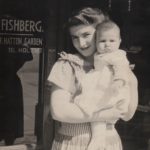 'After Auschwitz…’ the installation at Hundred Years Gallery, explores the experience of a second generation Holocaust survivor returning to the infamous Nazi death camp in Poland.

The artist, Lorna Brunstein was born in the East End, the area where her parents met as Holocaust survivors after the war.

The exhibition is an immersive multi-media installation that draws on the artist’s reflections on two recent visits to the memorial site of Auschwitz-Birkenau. This visceral piece features soil gathered from the site, specifically from the soles of shoes worn by members of the anti-fascist group she visited with. The trips were organised by the UAF (Unite Against Fascism campaign group) as part of their annual educational programme.

Lorna’s mother, Esther was a prisoner in Auschwitz during the war, as was her grandmother, who was murdered there. Esther Brunstein was a veteran anti Nazi and Human Rights campaigner, passionate about educating young people of the importance of raising awareness of the Holocaust; her father Stanislaw was an artist, they met in the Yiddish theatre in the East End. Lorna’s father died in 1994 and her mother in 2017.

Based in the South West, this is the first time the artist is showing her work in London. Following the death of her mother 2 years ago, Lorna says, “it feels appropriate and indeed necessary for the work to be shown here – it is taking the work back home”

For further details about the exhibition which is on until Sunday 8th September click here.

Also why not read this artical about Lorna from spitefieldslife.com.