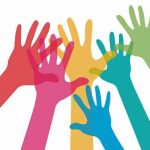 Thursday 11 June from 6pm – 7pm join ‘Redbridge Stands in Solidarity Against Racial Injustice #BlackLivesMatter’ event online. In Redbridge we are proud of our diversity and our strong feeling of community. We recognise the need to tackle discrimination and hate at all levels.

This event is open to all, please share widely.  You can join the event through this link – http://orlo.uk/TFTmp