On Shabbat morning, there was a special service dedicated to the Settlement with the SWESRS choir singing pieces that were familiar to Settlement members.     Settlement members recalled how the synagogue was important to their Jewish life in the East End, the only synagogue to be affiliated to both the Reform and Liberal movements in the UK.    The first to share his very special memories was Sid Goldwater who recalled how during the 2nd World War, Lady Rose Henriques, known as “The Missus” organised concerts and theatre entertainment, feeding the firemen of the blitz with her homemade soup.   Lady Rose was a very talented musician and played the organ at synagogue services, having organised the Settlement’s all female choir, the descendants of which still sing in SWESRS’ choir today amongst them Sid’s daughter Jocelyn who talked about the history of the Settlement choir and its leaders including the involvement of her mother Lilah who was both Chair and President of the Settlement.

On Sunday morning, SWESRS hosted a beigel brunch, attended by Settlement and SWESRS members and their families some attending from overseas.   Members revealed how Sir Basil Henriques, all 6ft 3 ins of him and known as “The Gaffer”, was originally a Captain of the Royal Artillery in the 1st World War, and drove one of the original tanks to be used in battle.   He was famous for his rather long sermons, wearing his university cap and gown with his tallit over his shoulder.   One of the Settlement members recalled that when Sir Basil was a Magistrate later in life, he presided over a case involving his father, one of the Settlement’s members who was arrested for breach of the peace in 1936 during the Battle of Cable Street – the penalty was unknown but Sir Basil was not forgiven.

Mitzi Kalinski told how her aunts Sophie and Sylvie fled Holland with their mother, helped by Sir Basil who got them here, leaving behind 19 family members who died in the concentration camps during the Holocaust.   Her aunt, Sylvie, was married at the Settlement at the tender age of 16.   Mitzi joined the Settlement when she was 22 and recalled how the Rabbi who did her baby’s blessing emigrated to the US and later converted to Christianity.

Stan Roberts recalled that he joined the Settlement 62 years ago in order to marry his wife Anita as her parents were very much involved in Settlement synagogue life.    This was a double wedding as Anita’s sister Kitty married her fiancé Lenny at the same time.   Apparently, this was the first and last double wedding to be officiated at the Settlement.   The two couples went on honeymoon together and Stan and Anita shared 57 very happy years together. 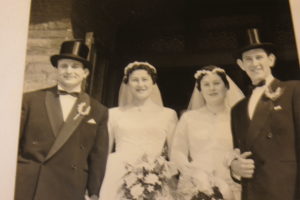 There were many famous Reverends and Rabbis who officiated at the Settlement.    Among them Rabbi Henry Goldstein recalled Rabbi Van der Zyl who founded the Leo Baeck College and Rabbi Lionel Blue who, although an East End boy himself, had won a place to study at Oxford University and chose the Settlement as his first placement.       Rabbi Goldstein remarked how the final Rabbi at the Settlement, Rabbi Laurence Rigal, although a Liberal Rabbi at heart, faithfully kept the Settlement on its modern Reform basis and continued to inspire and nurture its community spirit developed over many years by its many spiritual leaders. 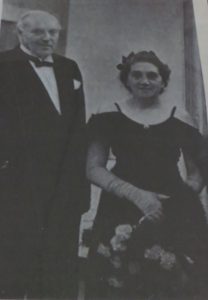 Finally, members recalled how the Oxford & St.George’s youth club based at the Settlement, became a centre for the Jewish community in the East End, with inspired leadership from “The Missus” who with her talent for music, rewrote and played Gilbert & Sullivan songs in Yiddish for the Jewish community who had emigrated from eastern Europe.     There were many classes and groups for young people including dance, music, cookery classes, dressmaking, keep fit, self-improvement, etc and during the 2nd World War it was even rumoured that there was a Marxist womens’ knitting group within the centre!!

In 1996/7 due to the decreasing numbers of the Jewish community living in the East End, the synagogue was merged with SWERS, to become SWESRS.  The Settlement’s spiritual leaders shaped the strength of the East End Jewish community throughout its existence, may their memory be a blessing.